Assisi: walking alongside the trails of Saint Francis and Santa Chiara 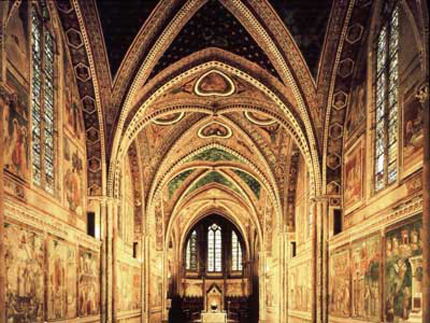 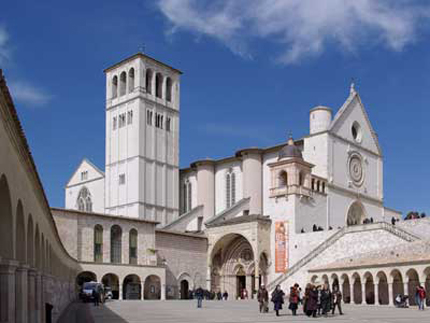 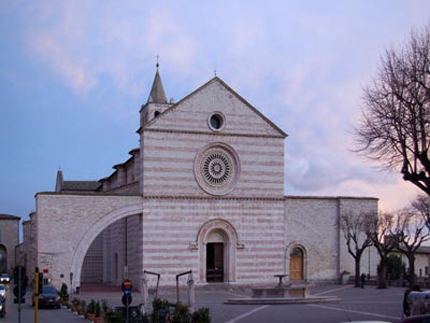 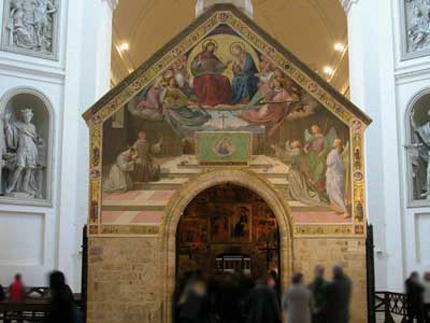 Assisi is an umbro-etruscan settlement and it became the important roman town of Assisium.
Numerous and famous painters worked in the basilica of S. Francesco in the 13-14 C.: Cimabue, Giotto, Pietro Lorenzetti and Simone Martini.
In 1226 St. Francis died in the transit chapel in S. Maria degli Angeli.
His body was buried in the church of S. Giorgio. In 1230 the tomb of St. Francis was transferred to the new basilica. This wonderful building was consecrated in 1253.
The lower church has a renaissance porch by Pietrasanta and a gothic portal. The interior is in Romanesque style and has a tau cross.
The oldest frescoes are in the walls of the nave and they represent the passion of the life of St. Francis.
A staircase descends to the crypt where a stone coffin houses the Saint’s body. Two more staircases continue up from the terrace to the transepts of the upper church.
The upper church full of light, unlike the lower church, is rich of masterpieces painted from 1277 to 1300 by Cimabue, Jacopo Torriti and Giotto. In the lower register of the nave are famous scenes from the life of St. Francis painted by Giotto and his assistants. Towards in the upper part are frescoes of stories from old and new testament by Cimabue and Jacopo Torriti. The medieval stained glasses are the most important in Italy.
The façade of the upper church has a beautiful rose window and a fine gothic portal. The street of S. Francis leads towards the centre of the town.
Walking along the way up on the right you can see the “Oratorio dei Pellegrini” of the 15 C. It has a fresco on the façade by Matteo Da Gualdo. On the left a 16 C. Palace “Bartocci-Fontana” and opposite the porch called Monte Frumentario.
The main square was built above a roman settlement, and nowadays the temple of Minerva of the 1 B.C. has a preserved pronaos of six Corinthian columns. In 1539 this building was transformed into a church and in 1634 it became in baroque style. Next to it in the 13 C. the tall Torre del Popolo and the Palazzo del Podestà were built. Opposite the temple there’s the town hall and “Palazzo dei Priori”.
From the town hall square, via S. Rufino leads up to a splendid roman square, which houses the wonderful façade in Romanesque style. All its interior was transformed in 1517 by the architect Galeazzo Alessi.
In Piazza S. Chiara built in 1257-1265 there’s a fantastic view of the Valle Umbra. Inside the church there’s a chapel which houses the crucifix that is said to have spoken to St. Francis. In the crypt there are S. Chiara’s relics.

This masterpiece was designed in 1569 by Galeazzo Alessi to cover the little 11 century oratory la “Porziuncola”.
Behind there’s the Cappella del Transito where St. Francis died the 3 October 1226. The roses chapel is a barrel volted chapel built by St. Bonaventura over the cave of St.Framcis.